Over the past six months, I’ve been making a classical guitar. It’s been a really wonderful experience and perhaps the most satisfying educational experience of all, to have learned a complete process of making that results in an instrument that I can use and enjoy. I’ve learned how to make a concert-level instrument, one-to-one with an experienced luthier, teacher and author of the established reference book on the subject, Making Master Guitars.

A desire to ‘work with my hands’ has been a recurring impulse over the last decade or more but circumstances hadn’t been right until recently. For the last two years, I have been receiving tuition from Rob Johns to learn how to play the classical guitar and earlier last year I began to notice a series of new instruments pass through my teacher’s studio. They were experiments in a new structural (internal) design of concert guitar that he and luthier, Roy Courtnall, were co-designing and I was privileged to be able to play them each week and discuss their musical attributes and craftsmanship with Rob during my lesson. Then, one day in the Spring, it occurred to me that I had to make a guitar for myself – there was no question about it – I lived just minutes away from a highly regarded luthier/author/teacher whose guitars I’d been playing for several months. From that point on I started to make the arrangements and borrowed £5000 to pay for it all: tuition, tools, wood and a thorough clear-out and refurbishment of my garden workshop. From July, I visited Roy’s home and spent, on average, a day each weekend working in his workshop on my guitar. 26 days (over six months) later, it’s now finished and I’m planning my next one – this time on my own. I documented the process thoroughly the first time around, and with that experience and his book, I feel a mixture of excitement, apprehensiveness and sufficient confidence.

Apart from learning to make a guitar, I also learned from Roy something about the tradition of classical guitar-making in the UK; enough to make me want to find out more when I wasn’t in the workshop. Again, I found myself in a rather unique position, being taught one-to-one by a luthier who was the author of a standard reference book on the subject and who established the UK’s premier guitar-making course at Newark College, just a half-hour drive from where I live. Roy was an autodidact who had carefully researched and beautifully written a book for other autodidacts; he had established a formal, accredited programme of lutherie within an institutional setting, and was now teaching one-to-one in the style of a traditional apprenticeship.  When I started to look around, I found that one or more of these three approaches were typical for all classical guitar-makers. Here’s a list of UK luthiers I have been compiling and a corresponding map I am plotting.

This preliminary research has identified what we might think of as three categories of ‘vocational training’: Self-taught (at home), one-to-one (in a professional workshop) and as a group (in an institutional setting), or rather:

This is interesting enough in itself, but then I was listening to the radio while in my refurbished workshop and there was a programme that discussed some recent research about ‘endangered crafts’. I wondered where lutherie stood on the list and found that it was deemed ‘currently viable’. That was a relief, but a number of issues relating to education and training have been identified as threatening the tradition. These include the difficulties of continuing training after completing a college course; college education only prepares individuals for further on-the-job training and self-directed learning. Securing such a position after college is difficult because it’s often not economical for experienced luthiers to take on apprentices/trainees; luthiers struggle to make a living and cannot afford to be spending time teaching someone as well as providing them with an income. Consequently, the traditional apprenticeship model is now very rare. Also, college courses are at risk because the numbers of students required to make them financially viable means that they are closing or accept too many students which, according to Radcliffe, has a detrimental effect on the quality of training.

So, I am embarking on a relatively new area of research for me. Of course, there are some, mainly conceptual, continuities with the work I have been doing on ‘Student as Producer’ and the pedagogic relationship; craft approaches to technology in higher education; non-alienating forms of work and ownership of the means of production. My work on co-operative higher education will continue, but as part of the Co-operative University Forum and Co-operative Higher Education Network.

In terms of my new focus, there is a range of related literature but no academic study of the teaching and learning (i.e. development and transmission of the tradition) of lutherie in the UK has been undertaken. I am interested in the history, but also very much on the different contemporary modes of lutherie education, the variety of pedagogical models, syllabi and institutional and non-institutional environments where the teaching and learning takes place.

The questions that I have in mind are:

Clearly it will require a study of historical data and literature (archives, books and trade magazines) to understand the 20th century history of UK classical guitar making, how the knowledge and skills of the craft has been transmitted, the role of institutions, and who the significant teachers have been up to the present day and the reasons for their significance.

The historical research will inform biographical research of luthiers who are still working or living, with an emphasis on how and from whom they learned, who they may have taught, and further issues relating to the teaching, learning and transmission of the craft.

A third part of the research will be a case study of the guitar-making course at Newark College.  The aim here is to understand the nature of teaching and learning in this setting, the design and content of syllabi, and the issues and challenges of lutherie education in an institutional setting.

Well, that’s the initial plan. While you’re here, why not watch a fascinating film of José Romanillos, one of the most important luthiers of the 20th century, making a guitar in Wiltshire in 1980. He taught himself with a 32 page book by A. P. Sharpe, published in 1957, which is very modest by comparison with more recent texts, to say the least.

Update: I am maintaining a bibliography here.

I am new to guitar making (I play a bit) and am being taught one-to-one by Roy Courtnall, author of Making Master Guitars. I expect it to take 20-30 days in total and have so far spent just four days with Roy. My time permits only one or two days a week working with Roy so it won’t be finished until early next year. It will be walnut back and sides, cedar neck and a lattice spruce top.

Needless to say, it’s a fantastic experience and education and I am documenting it as a reminder of my learning; what to remember, look out for, and to do when I come to build a guitar on my own. I intend to publish a separate blog of all the photos (there will be hundreds!) with descriptions and cross-references to his book when the guitar is complete. Click on the image below to see some highlights or follow this forum thread where I post updates at the end of each day.

Find out what happened next… 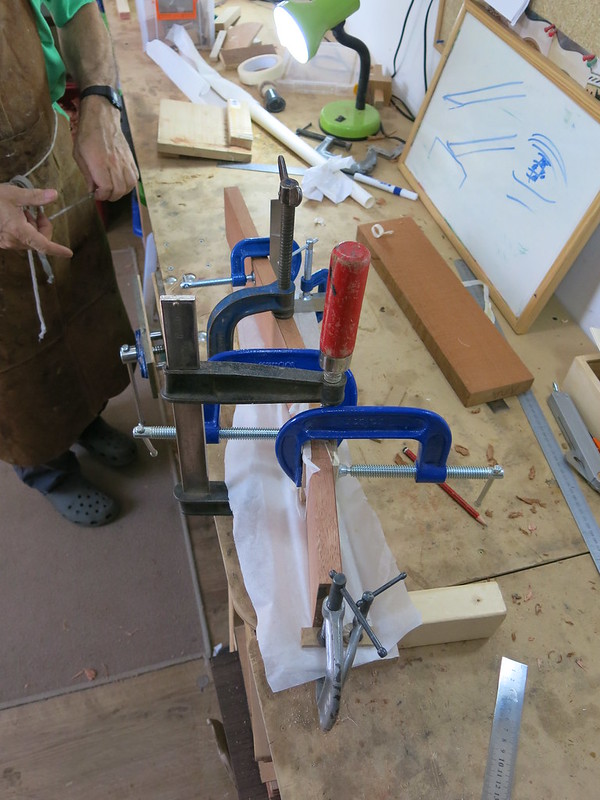